Description: In this game you'll have to walk around dungeons, collect different items, fight against monsters, meat different beast creatures and more. You'll be involved in lots of funny and strange situations where you'll be able to get laid with several characters. 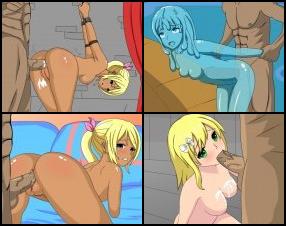 Lillie's hair is pink but the animation has blonde

The game looks fun, but it looks really, really basic. It's probably a beta version, you can't do much, the shopkeeper tells you she sells stuff, but you can't get into a dialogue with her what so ever, the warrior girl tells you to go to her room for some private training, but the there's no room to enter or to be found, the slimegirl you find is nowhere to be seen after you first fucked her.

what do I do after I get my dick healed?

This game is'n even Beta version we are talking ALFA version, it is shit. I doint doubt there is posibilities in it, but as of now there is a very long way.

sex scenes are good, but game isn't ended yet. after dick healled seens that there's nothing more to do.

yup its an alpha, it froze right after i beat the female guard before i could enter the dungeon...

the bar isn't even open.

The game sucks (currently) you can fuck the slime girl and the shop keeper. but not the bartender or the gate keeper. You just wonder around aimlessly fighting what looks like a Star Trek Rock Monster!

While the story seems compelling, the game itself is completely empty. Nothing to do here, about five minutes of "gameplay". Even the sex scenes are quite boring.

its lame i wanted to do that guard woman, but when you go into her bed room "to the left" as she said, their was nothing their... more so i kinda agree, this game isnt very good or well made, still its hard for some people to animate and program, so for those who do, good job in creating something, for those who dont and bitch about it, fuck off, and for those who do but bitch about it, then help the person out and make something epic

v4? they only added the nurse text and some white space lol xD at least they could fix the guard so you can go to her room and "interact" as she says at the beggining of the game.

The story are good 5 stars for that part. But the graphic layout when you play is horrible, 2 stars. And you can see that them team can do better graphic when they do the stil pictures/sexscenes which are good graphic, why dont they try to lift the level of the graphic it is sad. It could become a good game. Now it just look like a lefthand game. Also maybe they should'n update everytime they made just a little itsy bitsy progress

Anyone wanna have fun with a 17-years old german teen guy? anyone is welcome just hmu on kik: TheRealBatmanBats

What's the music's name? I really wanna find it online.