Description: To be honest, this game kinda sucks - it's all in Japanese, strange controls and it's difficult to understand what to do. But I've checked all contents and there are few good animations and mini games, if you can reach it. In first mini game keep dragging her boob until you unlock opportunity to move up her skirt. 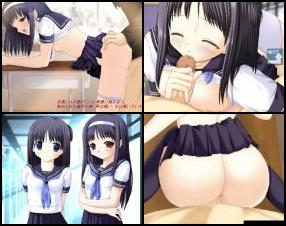 Day1: Tug her shirts end(right) then touch her boob until eyes mellowed. Finally try grab her shirt(double click & hold) if eyes isnt wide open pull shirt up then the skirt. Touch her down there until a text appears= end of day1.

(sry still on day1)Repeat same thing but can remove bra & underwear this time, however do not touch her boobs but its ok down there tho. After petting choose to end it by selecting the choice on the left.

Back in the teachers lounge, choose the lower(2nd) choice when prompted. Next scene, upper choice is using hands lower one is to lick it(day1 truly ends). Its an pretty short game but still enjoyable.

I think this game wasnt uploaded properly it has glitch. Have to restart countless times for the animations to works. Try to complete different endings then go to scenes recall(last option below).